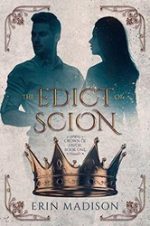 She especially can’t tell them now that she’s used her secret magic to ingrain herself into his elite school.She desperately wants to meet him, just once…

But her romantic hopes are crushed when she finds out that he’s immune to her magic… He actually hates her. He hates everyone. And NO ONE hates Maia. It’s impossible…

Check out:
(Crown of Favor Series) 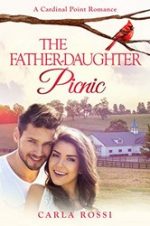 Two natural enemies, one smart kid, and a horse named Tilly. Will they all get it together in time for the Father-Daughter Picnic? Visit Cardinal Point in this enemies to lovers sweet romance.

Caroline Bishop has a plan. She intends to find a father for her six-year-old daughter Ava, and she’s going to use an online dating service to do it. Who needs romance when you have the internet? Only problem is, no one meets her requirements, and no one will ever measure up to the husband and father they lost. But Caroline’s job as a medical administrator leaves little time to find a match, especially when one of her patients is the cantankerous Cooper Hollister, whose arrogant son Graham fights her every step of the way. 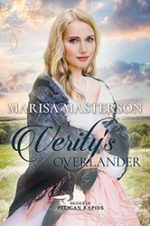 Poor Mrs. Ella Milton! The matchmaker bends her rules and interviews this bride and groom by letter. No matter the disaster that follows, she still feels the Lord’s blessing in the mess.

Verity Vaksdal wants adventure, just like her Viking ancestors. After reading dime novels, she knows that adventure will only come her way if she finds a dark and handsome hero.

Mrs. Ella Milton helps her find that hero, arranging for her to be a mail-order bride. To make her plan happen, Verity neglects telling Mrs. Milton her real age. At fifteen, Verity sneaks away from home and leaves a panicked older sister behind her… 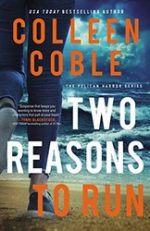 A lie changed her world. Police Chief Jane Hardy is still reeling from the scandal that rocked her small-town department just as she took over for her retired father—the man who wrecked her life with one little lie. Now she’s finally been reunited with her presumed-dead fifteen-year-old son, Will, and his father, documentarian Reid Bechtol.

A crisis looms. When a murder aboard the oil platform Zeus exposes an environmental terrorist’s plot to flood Mobile Bay with crude oil, Jane and Reid must put their feelings for each other behind them and work together to prevent the rig from being sabotaged. A killer targets her son.

Check out:
(The Pelican Harbor Series) 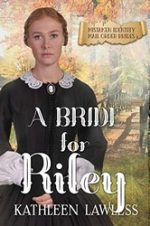 A BRIDE FOR RILEY
by Kathleen Lawless
KINDLE BARGAIN #ad

She was on her way to the convent. How did she wind up married instead?

Raised in an orphanage, Lucinda never felt she truly had the calling to be a nun, secretly longing for her own family. Like a miracle, her prayers are answered when confusion at the train station leads her to the marriage altar instead of the convent.

Riley’s sweet young mail-order bride is nothing like she sounded in her letters, but is enthusiastic about his niece and nephew joining their ready-made family. He enjoys getting to know her as a strike looms at a nearby mine he owns… 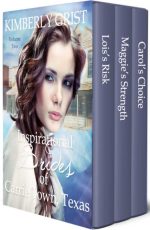 LOIS’S RISK: Lois is heartbroken because Daniel is ignoring her. Can she go against the 19th century rules of how a woman should behave and have the courage to tell Daniel how she feels?

MAGGIE’S STRENGTH: Sparks fly and suddenly for the first time Maggie is concerned more about how she is perceived by others, especially the young doctor? The question is why? Can they get past their first impressions?

CAROL’S CHOICE: Carol struggles to let go of the past, embrace the present, and hope for a better future. What she doesn’t bargain for is the handsome livery-stable owner, who understands the true meaning of family and Christmas. Will love conquer lavish?

“Hope is alive in these books. Good way to remember to be thankful/grateful for what we have and to stop comparing/complaining. God is god!” by Amazon Customer 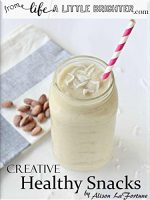 A collection of healthy snacks recipes, produced by the foodie blog, LifeaLittleBrighter.com. 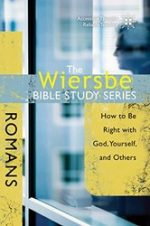 No book of the Bible more clearly illuminates the path of the Christian life than the book of Romans. Paul’s power-packed letter stands as a treatise on our faith-tackling important topics of immense importance such as sin, justification, sanctification, and more.

Take eight weeks to find out how the book of Romans can help you be right with God, yourself, and others. Trust beloved Bible teacher, Warren Wiersbe, to lead you or your small group on a chapter-by-chapter study that’s both penetrating in its analysis and easy to understand. 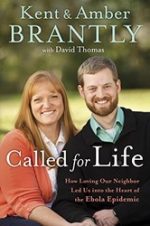 Dr. Kent and Amber Brantly moved with their children to war-torn Liberia in the fall of 2013 to provide medical care for people in great need—to help replace hopelessness with hope. When, less than a year later, Kent contracted the deadly Ebola virus, hope became what he and Amber needed too.

When Kent received the diagnosis, he was already alone and in quarantine in the Brantly home in Liberia. Amber and the children had left just days earlier on a trip to the United States. Kent’s personal battle against the horrific Ebola began, and as thousands of people worldwide prayed for his life, a miraculous series of events unfolded. 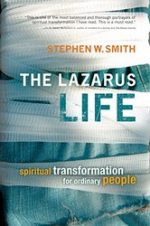 The life of Lazarus is one of the most recognizable stories found in God’s word. The chronicle of an ordinary man who found himself at the center of an astounding miracle. A divine process that fully revealed Christ’s transforming power, through a resurrection that preceded His very own.

But what if the story of Lazarus holds powerful parallels for us today? What if his story of hope and heartbreak, expectancy and disappointment, death and life, is our story too? What if the transformation Lazarus experienced is available to you and me?