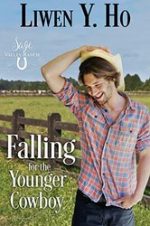 Falling for the Younger Cowboy
by Liwen Y. Ho

Two best friends. One secret chili recipe. The truth comes out when their fake relationship cooks up more feelings than they expected.

On the cusp of turning forty, Lexi Turner is finally single and happy. She has the perfect job working at Sage Valley Ranch and spends her free time hanging out with her best friend, James. Life is peaceful and carefree until her ex pays an unexpected visit to the ranch … with his new, much younger girlfriend in tow.

Head cook James Scott is ready to settle down now that he’s thirty. He’s been smitten with the gift shop manager since she started working at the ranch a year ago, but he’s been biding his time, waiting for the perfect opportunity to tell her how he feels. When Lexi asks him to be her pretend boyfriend to prove to her ex that she’s moved on, he jumps at the chance to show her love still exists. 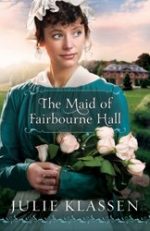 Pampered Margaret Macy flees London in disguise to escape pressure to marry a dishonorable man. With no money and nowhere else to go, she takes a position as a housemaid in the home of Nathaniel Upchurch, a suitor she once rejected in hopes of winning his dashing brother. Praying no one will recognize her, Margaret fumbles through the first real work of her life. If she can last until her next birthday, she will gain an inheritance from a spinster aunt–and sweet independence. But can she remain hidden as a servant even when prying eyes visit Fairbourne Hall? 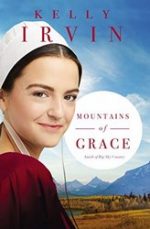 When wildfires threaten her Montana home, Mercy Yoder finds herself torn between the Amish man who proposed without a declaration of love and the Englisch smoke jumper who can’t seem to stay away.

Mercy Yoder loves her students and her life in the tiny village of West Kootenai, nestled at the foot of Montana’s most northern mountains. And she is in no rush to get married . . . much to the disappointment of her parents. In fact, she has turned down the one marriage proposal she’s received. Her beau, Caleb, has yet to tell her he loves her, stoking her fears that they simply aren’t right for each other. 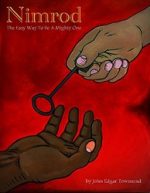 Nimrod: The Easy Way To Be A Mighty One
by John Townsend
LIMITED TIME FREE #ad

How Nimrod rose to great power and drew to himself a great people, and so to hunt down those who were living before the Lord 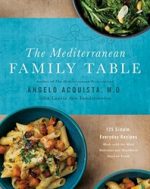 Tutti a tavola – All to the table with this bounty of Mediterranean recipes to try, savor, and gather around

To help his patients improve their health, Dr. Angelo Acquista began “prescribing” them recipes for nutritious and flavorful home-cooked meals prepared with ingredients key to the Mediterranean diet. The Mediterranean Family Table combines his medical experience and Sicilian roots to outline the guiding principles of the Mediterranean diet and takes it one step further with a collection of easy, wholesome, and delicious recipes the entire family will love. 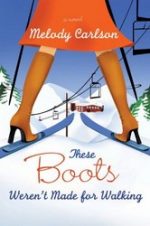 Willing to make the necessary sacrifices–even skipping the occasional latte–to ensure career success, 31-year-old Cassidy Cantrell “invests” in a chic pair of boots, certain they’ll make a spectacular impression and help seal the deal on a long-anticipated promotion from her Seattle employer.

But reality tromps all over her expectations. Cassie’s job is abruptly eliminated–and her love life obliterated, when her longtime boyfriend dumps her for a “friend.” Her self-esteem in tatters, Cassie limps home to the resort town she once so eagerly fled–only to find her recently divorced mother transformed into a gorgeous fifty-something babe with a thriving social life. 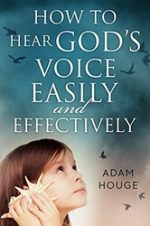 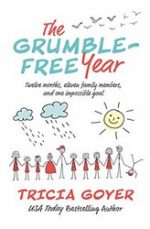 The Goyer home – with two parents, eight kids, and one eighty-eight-year-old grandmother with dementia–is never without noise, mess, activity, and, often, complaining. And it’s not just the kids grumbling. After adding seven children in less than six years through adoption, the Goyer family decided to move out of survival-mode and into unity- and growth-mode. They decided to tackle the impossible: a grumble-free year.

With grade-schoolers, teenagers, and a grandmother who believes children should be seen and not heard, plenty of room exists for flunking the challenge. Add to that seven children being homeschooled together in close quarters, and what could possibly go awry?